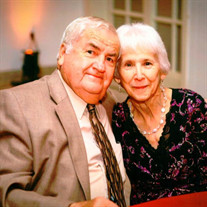 Mrs. Arline M. Courtney, 83, of Pageland, South Carolina passed away peacefully at her home and went to be with her Lord on Tuesday, January 19, 2016. Arline was born on January 31, 1932 in Mt. Croghan, South Carolina to the late Benton Crump and Sadie Watts Maner. She was preceded in death by her son, Dwight Edwin (Eddie) Courtney, Jr., and her Brothers, Roy Carson and Henry Maner. She is survived by her loving Husband of 63 years, Dwight E. Courtney, Sr.; Three children, Robbin (Al) Usher of Pageland, SC, Chris (Carol) Courtney of Marshville, NC and Tracy (Sharon) Courtney of Walterboro, SC, Four Grandchildren, Courtney (Chris) Brown of Pageland, SC, Trent (Jerica) Usher of Pageland, SC, Justin (Blair) Courtney of Pageland, SC and Josh (Emily) Courtney of Jefferson, SC, Four Great Grandchildren, Ali Grace Brown of Pageland, SC, Major Usher of Pageland, SC Captain Usher of Pageland, SC and LeeJon Tadlock of Marshville, NC and a Sister, Tona Carnes of Pageland, SC. Arline was a devoted Christian who loved her family and her church, High Point Baptist Church. She was a faithful member of the choir and served in various other capacities within the church, including Prime Timers and Women’s Missionary Union. She especially enjoyed working with the children during Vacation Bible School. She will be deeply missed by her family and all who knew her. Arline’s family would like to express special thanks to Chesterfield County Hospice and Help at Home Hartsville for their dedicated service and kindness throughout Arline’s illness. The family will receive visitors at the High Point Family Life Center on Thursday, January 21, 2016 from 1:30 – 2:30 PM A Celebration of Life Funeral Service will be held at 3:00 PM on Thursday, January 21, 2016 at High Point Baptist Church with Pastor Rodney Nicholson, Pastor Don Rhyne and Pastor Ernest Mungo officiating. The burial will follow in the Church Cemetery with Dr. Joel Dale officiating. In lieu of flowers, the family requests Memorial Contributions be sent to Hospice of Chesterfield County, PO Box 293, Chesterfield, SC 29709. Online condolences may be made to the family at baumgartnerfh.com

Mrs. Arline M. Courtney, 83, of Pageland, South Carolina passed away peacefully at her home and went to be with her Lord on Tuesday, January 19, 2016. Arline was born on January 31, 1932 in Mt. Croghan, South Carolina to the late Benton Crump... View Obituary & Service Information

The family of Mrs. Arline M. Courtney created this Life Tributes page to make it easy to share your memories.