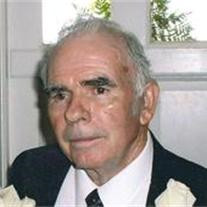 Mr. Arthur Lee Mullis, 83, of Pageland, SC went to be with the Lord on Monday, August 29, 2011 in his home. Mr. Mullis is the son of the late Liege and Effie Threatt Mullis. Mr. Mullis worked for Douglas Aircraft in Charlotte, NC. He... View Obituary & Service Information

The family of Arthur Mullis created this Life Tributes page to make it easy to share your memories.

Send flowers to the Mullis family.