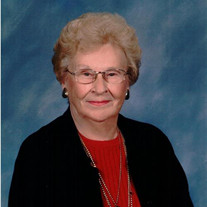 Barbara Hicks Lowery, 80, of Monroe, North Carolina went to be with her Lord on September 24, 2015 while surrounded by her loving family. Ms. Barbara Hicks Lowery was born in Pageland, South Carolina on December 9, 1934 to the late Walter L. Hicks and Annie Pigg Hicks. She was a member of Benton Heights Presbyterian Church in Monroe. Ms. Lowery was employed by Great Atlantic Pacific Tea Company after attending comptometer school in Charlotte, NC. In the early 60â€™s she was transferred to Hialeah, Florida where she lived for 40 years during which time she was employed by Florida East Coast Railroad Company until her retirement. She returned to Monroe, NC in 2007. She was preceded in death by her Brothers, Bruce Hicks, Louie Hicks and Carroll Hicks all of Pageland, SC and her Sisters, Mildred H. Kelly of Marietta, GA and Mary Ann Funderburk of Pageland, SC. She is survived by her Sisters, Davies Jordan of Pageland, SC and Hilda Outen (Ed) of Charlotte, NC, many caring Nieces and Nephews and her loving friend and neighbor Sandra Helms of Monroe. A Celebration of Life Funeral Service will be held at 3:00 PM on Saturday, September 26, 2015 at Liberty Hill Baptist Church. The burial will follow at Greenlawn Memorial Park of Pageland in Pageland, SC. The family will receive friends from 2:00 - 3:00 PM on Saturday, September 26, 2015 at Liberty Hill Baptist Church in the Fellowship Hall. In lieu of flowers, Memorials may be made to Hospice of Union County, 700 W. Roosevelt Blvd, Monroe, NC 28110 or Liberty Hill Baptist Church, PO Box 309, Pageland, SC or a Charity of One's Choice. The family would like to take this time to thank all the Staff Members of Hospice of Union County for their loving and compassionate care.

The family of Ms. Barbara Hicks Lowery created this Life Tributes page to make it easy to share your memories.

Barbara Hicks Lowery, 80, of Monroe, North Carolina went to be...

Send flowers to the Lowery family.