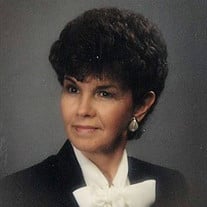 Mrs. Barbara Allen Rollings, 78, of Pageland, South Carolina passed away on Monday, January 29, 2018 surrounded by her loving family. Barbara was born on April 22, 1939 in Wadesboro, North Carolina to the late Henry Luther Allen Jr. and Lorena Brandenburg Allen. She later united in marriage to the late Charles Donald "Sonny" Rollings. In her youth, she loved singing and even had her very own radio show. Barbara was truly a people's person, which led her to serve her community by becoming the owner and operator of The Watermelon Patch for over 25 years. She also worked as a Sales Associate for Dillard Paper Company for 15 years. She was a very caring and loving person. Barbara would give the shirt off her back if it meant she could help someone in need. In her free time, Barbara also enjoyed gardening and was known as an avid reader. In addition to her parents and husband, Charles Donald "Sonny" Rollings, Barbara was preceded in death by a son, James "Donnie" Rollings and brother, Henry Luther "Butch" Allen III. Those left to celebrate and remember her life include her loving daughters, Crystal Plyler (David) of Lancaster, South Carolina and Robin Stoops (Brian) of Hartsville, South Carolina; brother, James "Jimmy" Allen of Charlotte, North Carolina; sisters, Carolyn Allen of Oak Island, North Carolina, Mary Elizabeth Coan of Wingate, North Carolina, and Amy Trish Allen of Pageland, South Carolina; one son, Michael Harrill of North Carolina; nine grandchildren and four great-grandchildren; also numerous nieces and nephews. A Celebration of Life Graveside Service will be held at 2:00 PM on Thursday, February 1, 2018 at Greenlawn Memorial Park of Pageland with Pastor Brad Threatt officiating. The family will receive friends immediately following the Graveside Service at Greenlawn Memorial Park of Pageland on Thursday, February 1, 2018. In lieu of flowers, memorials may be made to Hospice of Lancaster County, 902 West Meeting Street, Lancaster, South Carolina 29720 or Hospice of Chesterfield County, PO Box 293, Chesterfield, South Carolina 29728. Baumgartner Funeral Home of Pageland, South Carolina (www.baumgartnerfh.com) is assisting the Rollings Family.

The family of Barbara Allen Rollings created this Life Tributes page to make it easy to share your memories.

Send flowers to the Rollings family.