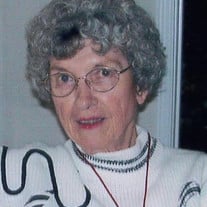 Mrs. Betty Chesser Sowell, 91, of Gastonia, North Carolina formerly of Pageland, South Carolina passed away peacefully on Friday, November 30, 2018 at Peak Resources Gastonia. Betty was born on October 13, 1927 in Lancaster, South Carolina to the late James Samuel Chesser Sr. and Beulah Mae Cunningham Chesser. She later met and united in marriage to Reece Sowell who precedes her in death. Betty retired after 42 years from Lynches River Electric Cooperative where she was an Executive Secretary and Staff Assistant. Later in life, Betty started painting and formed a strong passion for art. In her free time, she also enjoyed to travel, as well as, teacher Sunday School at Pageland United Methodist Church where she was a faithful member for many years. In addition to her parents and husband, Betty is preceded in death by her brothers, James Samuel Chesser Jr., Donald Edwin Chesser, Eugene J. Chesser, and James McManus and her sister, Margie Williams. Those left to celebrate and remember her life include her loving brother, John Chesser Sr. (Rose) of Cornelius, North Carolina and many nieces and nephews. The family will receive friends prior to the Graveside Service from 10:00 A.M. to 11:00 A.M. on Thursday, December 6, 2018 at Baumgartner Funeral Home, 708 West McGregor Street, Pageland, South Carolina 29728. A Celebration of Life Graveside Service will be held at 11:30 A.M. on Thursday, December 6, 2018 at Rose Hill Cemetery with Pastor Steven Sullivan officiating. In lieu of flowers, the family request that memorials be made to a charity of one's choice Baumgartner Funeral Home of Pageland, South Carolina (www.baumgartnerfh.com) is assisting the Sowell Family.

The family of Betty Chesser Sowell created this Life Tributes page to make it easy to share your memories.

Send flowers to the Sowell family.