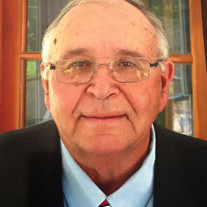 On June 16th, 2018 around 6:00 A.M., we lost the most important person in our lives. Billy L. Jenkins died due to a single vehicle accident on his way back from doing what he loved - checking on his watermelon fields and his farm. Billy was a life-long farmer who dearly loved what he did - growing corn, soybeans, wheat, rye, coastal hay, melons, turkeys, and cows. He had no time for hobbies other than dreaming of flying anything with a motor and wings and joking with his many friends and family. He dearly loved telling jokes more than anyone and always laughed more at his own jokes than anyone else did. Billy had shoulders that could carry the weight of the world (plus a grandchild or two) and a joyous smile that would light up a room. Billy was born May 7, 1952 of Mary Helen Demby Jenkins and Cecil Lee Jenkins of Pageland, S.C. Surviving family members include his wife, the absolute love of his life of forty-four years, Barbara Simpson Jenkins; two daughters, Angela (Gene) Garris and Jessica (Daniel) Griffin, son, Johnathan S. Jenkins, eight grandchildren, Laurel Garris, Pippa Garris, Carla Griffin, Maximos Garris, Leonidas Garris, Collin Griffin, Carys Griffin, and Celsey Griffin. Other family members include two brothers, Ricky (Karen) Jenkins and Ronnie (Glendora) Jenkins; two sisters, Kathy (Ricky) Atkinson and Ann (Chris) Cabaniss; five nephews and four nieces and their families; his brother and sister of the heart, Larry and Doris Blackman; also his farm family members, Rodel Rodriguez, Billy Wright, and Santos Rodriguez. Billy served on the Chesterfield County School Advisory Board for Jefferson, S.C., Chesterfield County Soil & Water Conservation Board, S.C. Watermelon Association Board, and the Chesterfield County Farm Bureau Board for numerous years. He was a member of the National Guard and served as a deacon at both High Point Baptist Church in Pageland, S.C. and Jefferson First Baptist Church in Jefferson, S.C. Billy was a devout Christian and instilled a sense of perseverance in faith and work to all he encountered, but most especially to his children, whom he always encouraged to succeed. Billy lived by the Law of the Harvest: "Do not be deceived: God cannot be mocked. A man reaps what he sows. The one who sows to please his sinful nature from that nature will reap destruction; the one who sows to please the Spirit, from the Spirit will reap eternal life. Let us not become weary in doing good, for at the proper time we will reap a harvest if we do not give up. Therefore, as we have opportunity, let us do good to all people, especially to those who belong to the family of believers." Galatians 6:7-10. He also adhered to Proverbs 6:4, "Don't put it off; do it now! Don't rest until you do." While we know that Billy is now in heaven and have the assurance that we will meet him again there, we deeply grieve his absence. It is with the help of his family and all his friends that we will cope with our loss. The family greatly appreciates all of the visits, prayers, and outpouring of love and support. A Celebration of Life Funeral Service will be held at 6:00 P.M. on Wednesday, June 20, 2018 at Jefferson First Baptist Church with Pastor Rick Hunter officiating. Burial will follow at Greenlawn Memorial Park of Pageland with Military Honors. The family will receive friends from 5:00 P.M. to 7:00 P.M. on Tuesday, June 19, 2018 at Jefferson First Baptist, 102 North Main Street, Jefferson, South Carolina 29718. In lieu of flowers, please make donations in memory of Billy to Jefferson First Baptist Church, P.O. Box 247, Jefferson, South Carolina 29718. Baumgartner Funeral Home of Pageland, South Carolina (www.baumgartnerfh.com) is assisting the Jenkins Family.

On June 16th, 2018 around 6:00 A.M., we lost the most important person in our lives. Billy L. Jenkins died due to a single vehicle accident on his way back from doing what he loved - checking on his watermelon fields and his farm. Billy was... View Obituary & Service Information

The family of Billy Lee Jenkins created this Life Tributes page to make it easy to share your memories.