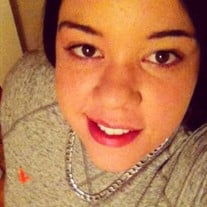 Brittany Taylor Nicholson, 23, of Pageland, South Carolina passed away on Friday, May 10, 2019 at her residence. Brittany was born on September 23, 1995 in Monroe, North Carolina to Brent Sutton Nicholson and the late Sharon Evans Nicholson.... View Obituary & Service Information

The family of Brittany Taylor Nicholson created this Life Tributes page to make it easy to share your memories.

Send flowers to the Nicholson family.