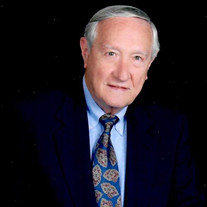 Cecil Ashcraft Knight, Jr., age 84 of Raleigh, NC formerly of Pageland, SC, passed away on Monday, April 3, 2017. He was born to the late Cecil Ashcraft Knight, Sr. and Annie Carnes Knight of Pageland, SC on February 21, 1933 in Lancaster, SC. He graduated from Buford High School and attended Mars Hill College and Wake Forest University where he graduated in 1953. Cecil served in the US Army and was stationed in Korea. His professional career included land acquisitions, real estate and accounting. He and his family lived in Whiteville, NC for over fifteen years, where he was active and served as President of the Whiteville Civitan Club. He retired from Landmark Organization in Wilmington, NC. He and his wife Barbara, of almost sixty years, made Raleigh his final place of residence where he was a member of Trinity Baptist Church. They chose Raleigh to spend their retirement years so that they could be closer to their children and grandchildren who will miss him and loved him so dearly. He is predeceased by his brother, David Knight. Cecil is survived by his wife, Barbara, his daughters, Belinda Fetner (husband Tim), Cecilia Holden (husband Tom), his three grandchildren, Cameron Fetner, CeCi Holden and Powell Holden, and his brother, Fred Knight (wife Nellie). A graveside service will be held at 12 noon on Friday, April 7, 2017 at Greenlawn Memorial Park of Pageland, SC (2584 Highway 601 North, Pageland, SC 29728). In lieu of flowers, memorial contributions may be made to Trinity Baptist Church Building Fund, 4815 Six Forks Road, Raleigh NC 27609 or Duke University Ophthalmology School of Medicine Macular Degeneration Research Division, 710 West Main Street Suite 200, Durham, NC 27710. The family would like to thank the wonderful care of the excellent medical team and staff of WakeMed Raleigh, especially surgeon Judson Williams, Jr. MD, MHS. Online condolences may be made to the family at baumgartnerfh.com

The family of Cecil Ashcraft Knight, Jr. created this Life Tributes page to make it easy to share your memories.

Send flowers to the Knight family.