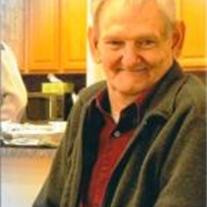 CHARLES T WILLIAMS OCTOBER 9, 1938 --- JANUARY 19, 2011 Just as tenderly as the dew kisses the roses, the angels took him by the hand as he made his final step in this earthly life on January 19. He was surrounded by his loving family. Charles worked at Grace Fabrication Finishing for 45 years. In his spare time he enjoyed gardening, reading the newspaper, and cutting comics out of the paper. His passion was music, as he loved the blues and Southern gospel. Fishing was his favorite pastime. In his later years, he enjoyed opening cards and “finding green”, eating candy and snack cakes, company, and was known for his “smart” comments and unique sense of humor. His grandchildren were the true joy of his life. He leaves behind his devoted wife and best friend of over 50 years, his “rock”, Roxie Griffin Williams, two daughters, Norma Jean Hendrix and Deanna (James) Kearns of Pageland; four grandchildren, Abigail Hendrix of Charlotte, NC, Joshua Kearns, Elizabeth (Daniel) Catoe, and Stacy Kearns all of Pageland, and one great-grandchild, Elijah Catoe. Three brothers, Robert Williams, Jerry (Nancy) Williams, and James A. Williams all of Lancaster. One Sister, Betty Jean W. Kirkley of Columbia, SC, and a host of nieces and nephews. He was preceded in death by his parents, Therrell H. and Virginia Knight Williams, brothers Bill and Harold Williams, and sister, Martha Williams Fiebig. Visitation will be at Sutton Baumgartner Funeral Home from 6 - 8 pm on Friday, January 21, and at the home at all other times. Funeral will be Saturday, January 22, at 2 PM at Union Hill Baptist Church, with burial immediately following in the cemetery. A brief visitation will follow the services in the church’s Life Center. Memorials may be made to Union Hill Baptist Church Building Fund, c/o Charlene Parnell, 482 Sanders Road, Pageland, SC 29728.

CHARLES T WILLIAMS OCTOBER 9, 1938 --- JANUARY 19, 2011 Just as tenderly as the dew kisses the roses, the angels took him by the hand as he made his final step in this earthly life on January 19. He was surrounded by his loving family.... View Obituary & Service Information

The family of Charles Williams created this Life Tributes page to make it easy to share your memories.

Send flowers to the Williams family.