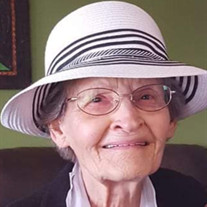 Dorcas Burkholder Campbell, 97, of Las Vegas, Nevada, passed away peacefully on May 7, 2020. She was born to parents Perry Conrad Burkholder and Orpha May Hochstetler, on September 4, 1922 in Meyersdale, PA. Dorcas had one brother, George Harold Burkholder ("Harold"), born September 12, 1916. Harold preceded her in death on November 23, 1952. When Dorcas was 5 years old, her parents moved to Charlotte, North Carolina due to the harsh winters in Pennsylvania. The doctor told her father that he needed to move to a warmer climate because of health reasons. Dorcas' father bought land in Charlotte, had a road cut to the property and for the family named it Burkholder Road. During World War II, Dorcas worked as a waitress at the popular Thacker's restaurant in Charlotte. Many of the GIs from the Morris Air Field would eat there. It was at this restaurant that Dorcas met her first husband, Byron Astor Griffith ("Buddy"), when she accidentally spilt a cup of hot coffee in his lap. She made an unforgettable impression on the young airman. They were married in 1943 in York, SC before he shipped out overseas to Germany. When the war came to an end, Buddy came home and they lived next door to Dorcas' parents on Burkholder Road. Together they had two daughters, Linda Maxine Griffith born February 13, 1948 and Marilyn Sue Griffith, born August 27, 1950. Dorcas was preceded in death by Buddy on July 24, 1969 due to a work accident. Dorcas then married William ("Billy") Campbell of Jefferson, SC in 1973. She moved to Jefferson, SC with Billy and lived there until 2018. Dorcas was a member of the Rocky Creek Presbyterian Church and had many friends in the Angelus community. Dorcas was the former President of the National Federation of the Blind of SC, Chesterfield County Chapter due to having macular degeneration. Dorcas was preceded in death by Billy on August 7, 1989. In March of 2018, Dorcas moved out to Las Vegas, Nevada to live with her grandson, Ray Godfrey III and his wife, Renee. Because of her rapidly diminishing eyesight, Dorcas could no longer live alone. Dorcas is survived by her daughter, Linda and her husband, Pelham Lee Jackson of Anchorage Alaska; her daughter, Marilyn Griffith of Mesa, Arizona, and 10 grandchildren: William, Ray, Tara, Sarah, Bryan, Mark, Stephanie, Peter, Thomas, John and 10 great grandchildren. Dorcas had a flair for baking cakes. She always made cakes for other people for special occasions and birthdays. Dorcas also loved to sew and make clothes. Dorcas always wanted to be outside doing gardening or taking care of animals instead of being in the house. She always tried to have a "kitchen" garden every year or at least some tomato plants. Ladybugs, sunflowers, and the color pink were a few of her favorite things. Anyone can come by Baumgartner Funeral Home on Sunday, May 31, 2020 from 11:00 AM to 3:00 PM to sign the register book and pay their respects. Due to the government-mandated, COVID-19 restrictions, we ask that you practice social distancing at all times. A Graveside Service will be held on Monday, June 1, 2020 at 2:00 PM at Forest Lawn Cemetery West, 4601 Freedom Dr., Charlotte, North Carolina next to her first husband, Buddy with Pastor Sue Black officiating. In lieu of flowers, donations may be made to The National Federation of the Blind of SC, Chesterfield County Chapter, C/O Doris Thurman, 66 Thurman Garage Lane, Jefferson, SC 29718. Baumgartner Funeral Home of Pageland, South Carolina (www.baumgartnerfh.com) is assisting the Campbell family.

Dorcas Burkholder Campbell, 97, of Las Vegas, Nevada, passed away peacefully on May 7, 2020. She was born to parents Perry Conrad Burkholder and Orpha May Hochstetler, on September 4, 1922 in Meyersdale, PA. Dorcas had one brother, George Harold... View Obituary & Service Information

The family of Dorcas Burkholder Campbell created this Life Tributes page to make it easy to share your memories.

Send flowers to the Campbell family.