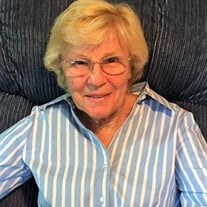 Mrs. Elizabeth Arden Agerton, 80, of Pageland, South Carolina went to be with her Lord on Friday, April 21, 2017. Lib was born in Chesterfield County on October 15, 1936 to the late Hampton Pate and Hessie McCray. She grew up in the Wolf Pond Community in Pageland, where she later met and united in marriage to her loving husband of 58 years, Jon Edward Agerton. In her free time, she enjoyed spending time at home taking care of her family, caring for animals, as well as cooking and gardening. Lib was a kind-hearted and loving Christian woman who treated everyone as she wanted to be treated in return. Two of her favorite sayings were, "Where there's Life, there's hope" and "If you had faith the size of a mustard seed, nothing will be impossible to you." She showed her love and dedication to her children by providing a warm homestead as well as the love for her family by taking care of her brother and her mother in their final days here on earth. Lib was a faithful member of Wolf Pond Baptist Church where she taught Sunday school for many years. In addition to her parents, Lib is also preceded in death by her brother, James Bruce Pate. Those left to celebrate and remember her life include her loving husband of 58 years, Jon Edward Agerton of Pageland, South Carolina, sons, Jonny Agerton and Barry Agerton both of Pageland, South Carolina, daughters, Ann Lucas and Pam Boies both of Matthews, North Carolina, grandchildren, Chris Agerton, David Boies and Kelly Taub, great-grandchildren, Miranda Agerton, Christian Agerton, Stella Taub and Jack Taub and a four-legged companion, Buster Brown. A Celebration of Life Graveside Service will be held at 2:00 PM on Sunday, April 23, 2017 at Wolf Pond Baptist Church Cemetery with Pastor Mark Evans officiating. In lieu of flowers, memorials may be made to Wolf Pond Baptist Church, 78 Wolf Pond Church Rd, Pageland, SC 29728, Alzheimer's Association South Carolina, 4124 Clemson Blvd., Suite L, Anderson, SC 29621 or Chesterfield County Animal Shelter, 436 Goodale Rd, Chesterfield, SC 29709. Baumgartner Funeral Home of Pageland, South Carolina (www.baumgartnerfh.com) is assisting the Agerton Family.

Mrs. Elizabeth Arden Agerton, 80, of Pageland, South Carolina went to be with her Lord on Friday, April 21, 2017. Lib was born in Chesterfield County on October 15, 1936 to the late Hampton Pate and Hessie McCray. She grew up in the Wolf Pond... View Obituary & Service Information

The family of Elizabeth "Lib" Arden Agerton created this Life Tributes page to make it easy to share your memories.