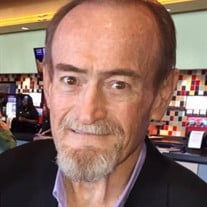 Acworth, Georgia Tuesday October 13th, 2020, Gary Donald Courtney entered the presence of the Lord. Born February 27, 1951 in Monroe, North Carolina, the oldest of four children. He attended Pageland High School in Pageland S.C., where he played football and earned the nickname "Bull". He went on to attend Wingate College, and married his high school sweetheart, Sheila Funderburk. Whether in the marketplace, in various sales and entrepreneurial ventures, or the pulpit as a minister, Gary lived his life with a purpose: sharing the gospel, and the love of Jesus with everyone he knew. Gary was passionate about teaching the word of God, living out his faith, and pointing people to a genuine relationship with Jesus Christ. He celebrated fifty years of marriage with his wife Sheila on July 24the, 2020, and his greatest desire was to leave a legacy of faith. Indeed his legacy is safe in the hearts of his children, grandchildren and countless others he leaves behind. He is survived by his wife, Sheila Courtney, his sister, Cathy Knight, his children and their spouses, Jo Anna and Craig Statz, Angel and Ben Cope, and Gary Michael Courtney, his five grandchildren, Emily and Anna Cope and Sydney, Olivia and Sawyer Statz. He was preceded in death by his oldest son, Shannon Courtney. "..I will not be at all ashamed, but that with full courage now, as always, Christ will be honored in my body, whether by life or by death. For to me to live is Christ, and to die is gain. If I am to live in the flesh, that means fruitful labor for me. Yet which I shall choose I cannot tell. I am hard pressed between the two. My desire is to depart and be with Christ, for that is far better." Philippians? ?1:19-23? ?ESV? He fought the good fight, and ran his race well. We are all confident he has heard his savior say "Well done, good and faithful servant" A Celebration of Life Memorial Service will be held at 3:00 PM on Sunday, October 18, 2020 at Greenlawn Memorial Park of Pageland with Pastor Ralph Walden and Pastor David Williamson officiating. Baumgartner Funeral Home of Pageland, South Carolina (www.baumgartnerfh.com) is assisting the Courtney family.

The family of Mr. Gary Donald Courtney created this Life Tributes page to make it easy to share your memories.