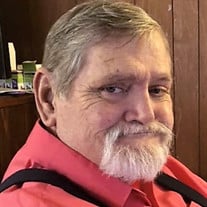 Mr. Glenn Evan Langley, 66, of Pageland, South Carolina went to his heavenly home on Tuesday, November 6, 2018 at CHS-Union surrounded by his loving family. Glenn was born in Charlotte, North Carolina on March 18, 1952 to the late Bruce Langley and Loree Evans Langley. He worked at the Charlotte Observer for thirty-seven and a half years. He was a Journeyman Printer, Graphic Designer, and Trainer. Many of his friends became family during that time. He loved his wife and family with all his heart. He had a special place in his heart for his miracle "babies" Beth, Gigi, Abigail, and Kal-El. Glenn enjoyed preparing the bulletins for many years at his church. Today he is riding his motorcycle all over heaven with his friends and loved ones gone one before him. In addition to his parents, Glenn is preceded in death by a daughter, Kimberly Jenkins, as well as, his beloved grandparents, and two grandchildren who left too soon. Glenn leaves behind a loving wife of 37 years, Pat Langley of the home, a daughter, Linda Collins (Marvin) of Greenville, South Carolina, a son, James Langley (Christina) of San Bernardino, California, a daughter, Crystal Langley (David) of Jefferson, South Carolina, brothers, Max Langley (Mary) of Rock Hill, South Carolina, and Joe Langley (Tina) of Pageland, South Carolina, sixteen grandchildren, Beth, Stacy, April, Abigail, Sherri, Tonya, Lisa, Brian, James Jr., Noah, Jackson, Brandilyn, Madyln, Anthony, Gennavee, Katelyn, twelve great-grandchildren, Elizabeth, Caden, Madyson, Kyler, Ariana, Blakely, Everleigh, Adalei, John Patrick, Kal-El, Gigi, Adley, and also many nieces and nephews. The family would like to give a special thanks to Davita Dialysis, and their employees for the wonderful care Glenn received during his time there. The family will receive friends prior to the service from 2:00 P.M. to 3:00 P.M. on Sunday, November 11, 2018 at Rose Memorial Church of the Nazarene, 1005 North Pearl Street, Pageland, South Carolina 29728. A Celebration of Life Memorial Service will be held at 3:00 P.M. on Sunday, November 11, 2018 at Rose Memorial Church of the Nazarene with Pastor Scott Gibson Officiating. In lieu of flowers, the family request that memorials be made to Rose Memorial Church of the Nazarene, c/o Building Fund, 1005 North Pearl Street, Pageland, South Carolina 29728 or to The Langley Family, c/o Pat Langley, 405 South Oak Street, Pageland, South Carolina 29728 to help with any future expenses or want to send a card, Rose Memorial Church of the Nazarene, c/o The Langley Family, PO Box 275, Pageland, SC 29728. Baumgartner Funeral Home of Pageland, South Carolina (www.baumgartnerfh.com) is assisting the Langley Family.

The family of Glenn Evan Langley created this Life Tributes page to make it easy to share your memories.

Send flowers to the Langley family.