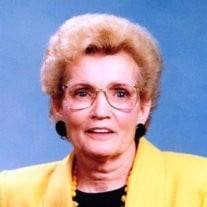 Mrs. Grace Griggs Caldwell, 91, of Pageland, SC went to be with her Lord on Sunday, November 24, 2013 while surrounded by her loving family and under Hospice care. Mrs. Grace Griggs Caldwell was born in Chesterfield County to the late William A. and Etta Mangum Griggs. She was later united in marriage to Lloyd Caldwell. She is preceded in death by her Husband, Lloyd Caldwell and her Son, Lloyd W. Caldwell. She was a member of First Baptist Church of Pageland. Mrs. Caldwell is survived by her Sons, Charles Caldwell (Angie) of Jefferson, SC and Barry Caldwell (Maria) of Monroe, NC, Daughter, Carolyn C. Rayfield of Kernersville, NC, Sister, Ethel Stacy of Columbus, OH, Daughter-In-Law, Pat Caldwell of Pageland, SC, Eight Grandchildren and Five Great Grandchildren. A Celebration of Life Funeral Service will be held at 2:00 PM on Tuesday, November 26, 2013 at First Baptist Church of Pageland. The interment will follow at Greenlawn Memorial Park of Pageland. The family will receive friends from 1 PM to 2 PM, Tuesday, November 26, 2013 at First Baptist Church of Pageland in the Fellowship Hall. In lieu of flowers, Memorials may be made to, Alzheimer’s Association, South Carolina Chapter 4124 Clemson Blvd – Ste L, Anderson, SC 29621, Or American Cancer Society, P.O. Box 22718, Oklahoma City, OK 73123-1718.

The family of Mrs. Grace Griggs Caldwell created this Life Tributes page to make it easy to share your memories.