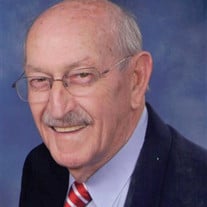 Mr. Harry W. Deese, 88, of Pageland, SC passed away in the early morning hours on Friday, October 12, 2018. Harry "Goober" was born on September 11, 1930, in Pageland, SC, to the late Gary H. Deese and Wincie S. Deese. Goober met and married his best friend and love of his life, Sara E. Rollings and they shared a wonderful 60 years together. He was a veteran and served his country in the United States Marine Corps. He was a Mason, a Shriner, and was very active in his church and community. He proudly served on the Pageland Fire Department for 43 years. He was a retired Finishing Manager for Caro-Knit in Jefferson, SC where he worked 32 years. He loved life and believed in living life to its fullest. Goober cherished the scriptures John 3:16 "For God so loved the world, that he gave his only begotten son, that whosoever believeth in him should not perish but have everlasting life" and Psalm 73:26 "My flesh and my heart faileth: but God is the strength of my heart, and my portion forever". He loved the beach and his beach family. He also loved the mountains in the fall, during the foliage change. He is now restored and in Heaven. Although he will be missed very much, he leaves behind family members, friends, and others who loved him and have fond memories and cherished stories to tell for years to come. A celebration of life funeral ceremony, officiated by Pastor Joel Dale, will be held at First Baptist Church of Pageland on Monday, October15, 2018 at 3:00pm with visitation one hour prior. Burial will follow immediately at Greenlawn Memorial Park of Pageland with Military Honors and Masonic Rites. In lieu of flowers, memorials may be made to Hospice of Chesterfield County, Inc. P.O. Box 293, Chesterfield, SC 29709 or Shriner's Hospitals for Children, 950 West Faris Road, Greenville, SC 29065 He is preceded in death by his father and mother, Gary and Wincie, and his sister, Ellen Crawford of Chesterfield, SC. Surviving are his wife of the home, Sara, a son, Tony (Karla) Deese, a daughter, Tammy (Al) Farshchi, two grandchildren, Alex and Adam Farshchi, seven granddogs, Shadez, Lucy, Justice, Mack, Marcus, Pearl, and Stella, and nephew, Mike Crawford (Jennifer) and his family of Chesterfield, SC. Baumgartner Funeral Home of Pageland, South Carolina (www.baumgartnerfh.com) is assisting the Deese Family.

The family of Harry ''Goober'' W. Deese created this Life Tributes page to make it easy to share your memories.

Send flowers to the Deese family.