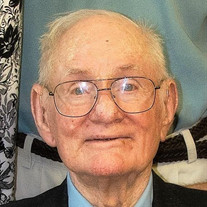 Mr. Hollis Miller Horton Sr., 96, of Marshville, NC passed away peacefully on Saturday, August 06, 2016 at Jesse Helms Nursing Home in Monroe, NC. Mr. Horton was born on October 8, 1919 in Union County, North Carolina to the late Fred Horton and Elizabeth Miller Horton. He later met and united in marriage to the late Theda McCauley Horton. Mr. Horton served in the US Army during World War II. He was a member of First Presbyterian Church of Pageland, where he was an Elder of the church and a Sunday School Teacher. He loved spending time with his family and enjoyed traveling to different places. He was a farmer and just enjoyed spending time in the outdoors. He is preceded in death by two Brothers, Francis Horton and Fred Horton and one Sister, LaRue Ayres. Mr. Hollis is survived by his Son, Hollis Horton Jr. of Marshville, NC, Daughters, Johnnie H. Davis (Daryl) of Bartlett, TN and Janet H. Dillon (Dana) of Marshville, NC, Sister, Fay Crosby of Plano, TX, Grandchildren, Cameron Davis of Pittsburgh, PA, Todd Davis of Chattanooga, TN, Lee Dillon (Jennifer) of Jefferson, SC, Christopher Dillon (Jonna) of Wingate, NC and Great Grandchildren, John Hollis Dillon and Liston Miller Dillon both of Jefferson, SC, Ethan, Gabriel and Alexander all of Wingate, NC. The Horton Family will hold a Memorial Service at 11:00 AM, Monday, August 8, 2016 at First Presbyterian Church of Pageland with Rev. Dick Tubbs and Dr. Fred Horton officiating. The family will receive friends from 10:00 - 11:00 AM, Monday, August 8, 2016 at First Presbyterian Church of Pageland in the Fellowship Hall. In lieu of flowers, Memorials may be made to First Presbyterian Church of Pageland, PO Box 36, Pageland, SC 29728. Online condolences may be made to the family at baumgartnerfh.com Baumgartner Funeral Home of Pageland, SC ([email protected]) is handling the arrangements.

The family of Hollis Miller Horton, Sr. created this Life Tributes page to make it easy to share your memories.

Send flowers to the Horton family.