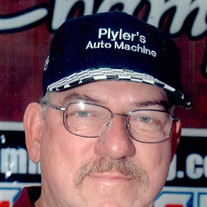 Mr. James C."Buddy" Plyler, 75, of Pageland, South Carolina passed away on July 8, 2016 in Charlotte, NC. Mr. James C. Plyler was born on June 8, 1941 in Pageland, South Carolina to the late Henry Plyler and May Jordan Plyler. He later met and united in marriage to Geraldine Boatright Plyler. James was the owner of Plyler's Machine Shop. James lived life to it's fullest. He loved his family, people, cooking and was known for his mechanic and racing skills. At the Pageland Dragway, he was " The Man"; 7 time point champion at the track and IHRA's oldest person to win the bracket finals in 2014. He cooked for the Taste of Pageland, representing both T&L Grocery and Bi-Lo of Pageland. He was a legend and a friend to everyone. He is predeceased in death by his Son, Christopher Griffin, Brothers, Johnny Plyler, Harry Plyler and Bobby Plyler. Mr. Plyler is survived by his loving Wife, Geraldine Boatright Plyler of the home, Son, Timothy Plyler of Pageland, SC. Daughters, Charlotte Tucker of Concord, NC, Pat Patterson (Scott) Tradesville, SC, Debbie Todd (Danny) of Lancaster, SC and Amanda Helms of Pageland, SC, Sisters, Martha "Pete" Rendules of Pinehurst, NC, Shirley Gene Arant of San Antonio, TX, Annie Lou Wright of Lancaster, SC, Five Grandchildren, Four Great Grandchildren and Two Great Great Grandchildren. A Celebration of Life Funeral Service will be held at 4:00 PM Monday, July 11, 2016 at Baumgartner Funeral Home Chapel. The burial will follow at Greenlawn Memorial Park of Pageland. The family will receive friends from 2:00 PM - 4:00 PM on Monday, July 11, 2016 at Baumgartner Funeral Home. In lieu of flowers, Memorials may be made to Hospice of One"s choice.

The family of Mr. James (Buddy) C. Plyler created this Life Tributes page to make it easy to share your memories.