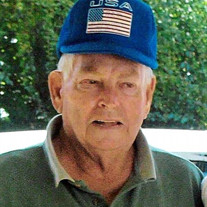 Mr. James Cornelius Courtney, 85, of Charlotte, North Carolina formerly of Pageland, South Carolina passed away on Monday, January 22, 2018 surround by his loving family and while under the care of Hospice. J.C. was born on March 26, 1932 in Pageland, South Carolina to the late James Courtney and Wilma Plyler Courtney. He later met and united in marriage to the late Dorothy Srite Courtney. J.C. loved to travel whether it was going to flea markets to walk around or simply just driving his grandchildren around. He enjoyed having cookouts with his family whom he loved dearly and was so proud of them. In his free time, he enjoyed working in his yard. He also really liked to spend time in the kitchen where he loved to cook, especially making his legendary cornbread that he would deliver to his family. In addition to his parents and wife, Dorothy Courtney, J.C. is preceded in death by his eight sisters. Those left to celebrate and remember his life include his loving sons, Kevin Courtney (Missy) of Mount Holly, North Carolina and Ricky Courtney (Becky) of Concord, North Carolina; daughters, Jill Anderson (David) of Rock Hill, South Carolina and Gloria Jean Courtney of Washington; four grandchildren, Ken Walker (Molly) of Lancaster, South Carolina, Savannah Courtney and Luke Courtney both of Mount Holly, North Carolina, and Mitchell Courtney of Concord, North Carolina. A Celebration of Life Graveside Service will be held at 3:45 PM on Thursday, January 25, 2018 at White Plains Baptist Church Cemetery with Rev. Fred Mays officiating. The family will receive friends prior to the Graveside Service from 2:00 PM to 3:30 PM on Thursday, January 25, 2018 at Baumgartner Funeral Home, 708 West McGregor Street, Pageland, South Carolina 29728. In lieu of flowers, memorials may be made to Levine & Dickson Hospice House, 11900 Vanstory Drive, Huntersville, North Carolina 28078. Baumgartner Funeral Home of Pageland, South Carolina (www.baumgartnerfh.com) is assisting the Courtney Family.

Mr. James Cornelius Courtney, 85, of Charlotte, North Carolina formerly of Pageland, South Carolina passed away on Monday, January 22, 2018 surround by his loving family and while under the care of Hospice. J.C. was born on March 26, 1932... View Obituary & Service Information

The family of James Cornelius "J.C" Courtney created this Life Tributes page to make it easy to share your memories.