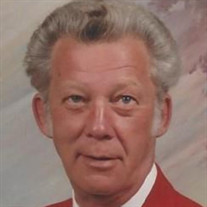 This obituary is being shared as a courtesy to the Rallings family. Baumgartner Funeral Home extends their love and sympathy to the family during this time. FLORENCE - On Monday, November 23, 2020, James Richard Rallings, loving husband and father of three, passed away after an extended illness at the age of 77. Jimmy was born on January 2, 1943, in Charlotte, NC. He grew up in Pageland, SC. Jimmy and Louise Rollins of Jefferson, SC, were married and moved to Florence, SC, where they raised Mike, Marty and Murray. He worked at the Florence Morning News until he began his career at the US Postal Service, where he worked for 31 years. His last post was at the Quinby, SC, Post Office. He loved to play golf with family and friends. He also enjoyed fishing and NASCAR. Jimmy and Louise also enjoyed traveling, visited all but four of the United States and several countries in Europe, and was a member of Quinby UMC. He was preceded in death by his father, J.W., and his mother Margaret (Laney-Rallings-Dobson, Hervey Dobson), a brother, John Wayne, two sisters, Wanda Allen and Carol Vehorn, daughter-in-law, Michelle Rallings (Murray) and his granddaughter, Rose Marie (Marty and Kathy). He is survived by his wife of 60 years, Louise, of Quinby, SC; three sons, Mike (Cindy) of Florence, Marty (Kathy) of West End, NC, and Murray of Quinby. He had several brothers and sisters-in-law that preceded him in death, Anna Rollins-Rivers-Polk, Donald Rollings, Eddie Rollins, Ricky and Marcel Oliveira, and Jerry Rollins. Surviving in-laws include Anthony Oliveira, Dee Fuller (Steel), Larry Rollins (Shirley), Eddie Rivers (Anna), Betty and Larry Lewis (Donald), Mickey Vehorn (Carol), Jimmy Allen (Wanda). He had two granddaughters, Mary-Kathryn Adams (Paul), Danielle and two great-grandsons, Jaydan and Rafe. He had many cousins, nieces, nephews and many friends that were a big part of his life for many years. A Memorial service will be held at 2:00 p.m. on Saturday, December 12, at Quinby United Methodist Church. The family will greet family and friends following the service. We ask that everyone practice social distancing and please wear a face covering. In lieu of flowers, memorials may be made to Quinby UMC, 1247 Ashby Rd., Quinby, SC 29506.

This obituary is being shared as a courtesy to the Rallings family. Baumgartner Funeral Home extends their love and sympathy to the family during this time. FLORENCE - On Monday, November 23, 2020, James Richard Rallings, loving husband and... View Obituary & Service Information

The family of James Richard Rallings created this Life Tributes page to make it easy to share your memories.

This obituary is being shared as a courtesy to the Rallings family....

Send flowers to the Rallings family.