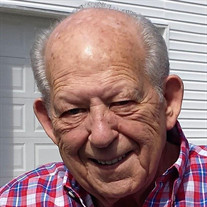 Mr. James Earl Smith Sr. went to be with the Lord on Tuesday, April 5, 2016 while surrounded by his loving family. Mr. Smith was born on December 20, 1936 in Knoxville. Tennessee to the late James Carl Smith and Gladys Clayton Smith. He... View Obituary & Service Information

The family of James Earl Smith , Sr. created this Life Tributes page to make it easy to share your memories.

Mr. James Earl Smith Sr. went to be with the Lord on Tuesday,...