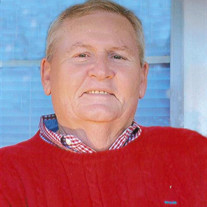 Jerry Thomas “Shug” Haigler entered his eternal place of rest January 13, 2019, after several years of declining health. Shug had a quick wit and a great sense of humor and enjoyed telling jokes and sharing his “Shugisms”. Shug was very passionate about his God, his church, his family, and considered one of his greatest blessings was being Papa Shug to his grandchildren. Shug was born on September 23, 1945 to John M. and Louise I. Haigler. After attending Campbell University where he played baseball, he served as a policeman for his hometown of Pageland for several years. He retired in 2009 after 30 plus years as an insurance agent. Shug was an avid fan of the New York Yankees and Central High School Sports. He was the sports writer for Pageland area sports for over 40 years. In 2006, Shug began a weekly column in the Pageland Progressive Journal which he called “Where Are They Now?” that showcased various former athletes from Central High School and Pageland High School. A collection of those articles were published in 2009 in the book “Where Are They Now?”. Shug was known as the “Voice of the Eagle’s” baseball team serving as the announcer for Central’s baseball team until 2015. A “Love of the Game of Baseball” award was begun in his honor recognizing a Central High senior baseball player each year who exemplifies the love of the game of baseball. Shug was a member of First Baptist Church of Pageland where he served as a deacon and Youth Sunday School teacher for many years. In addition to his parents, he is preceded in death by his sisters, Dorothy Sears, Margaret Graham, and Carolyn Jenkins. Those who he leaves to cherish his memory includes his beloved wife of almost 50 years Janet C. Haigler, sons, Jerry T. “Punkie” Haigler, Jr.(Nancy) of Jefferson, SC, Jonathan C. Haigler (Shannon) of Pageland, SC and Jason P. Haigler (Mandy) of Pageland, SC; grandchildren, Madeline G. Haigler, Laney C. Haigler, Cody P. Haigler, John W. Haigler, Triston E. Haigler and Elizabeth B. (Lizzie) Haigler; brother, Boyce R. Haigler of Columbia, SC; Also, special life-long friend, George Courtney (Ann) of Seneca, SC. A celebration of life funeral service will be held at 4:00 PM, Thursday, January 17, 2019 at First Baptist Church of Pageland, 203 Pigg St., Pageland, SC 29728 with Dr. Joel Dale officiating. Burial will follow in the church cemetery. Because of Shug’s love for the Central High Eagles, you are welcome to share your support for the family by wearing Central Eagles colors to the service if possible. The family will receive friends 6:00 to 8:00 PM Wednesday, January 16, 2019 at Baumgartner Funeral Home in Pageland. In lieu of flowers, memorials may be made to Central High School Baseball, 200 Zion Church Road, Pageland, SC 29728. Baumgartner Funeral Home of Pageland, South Carolina (www.baumgartnerfh.com) is assisting the Haigler Family.

Jerry Thomas &#8220;Shug&#8221; Haigler entered his eternal place of rest January 13, 2019, after several years of declining health. Shug had a quick wit and a great sense of humor and enjoyed telling jokes and sharing his &#8220;Shugisms&#8221;.... View Obituary & Service Information

The family of Jerry Thomas "Shug" Haigler created this Life Tributes page to make it easy to share your memories.

Send flowers to the Haigler family.