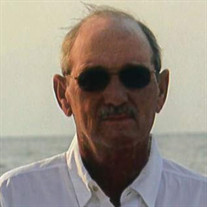 Mr. Johnnie E. Jenkins, 73, of Jefferson, SC passed away on Tuesday, July 14, 2020 at his home while surrounded by his loving family. Mr. Johnnie Jenkins was born on January 28, 1947 in Chesterfield, SC to the late John Wilson Jenkins and Clara... View Obituary & Service Information

The family of Johnnie E Jenkins created this Life Tributes page to make it easy to share your memories.