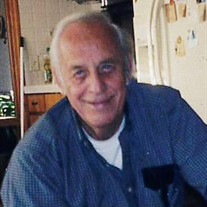 Mr. Jon Edward Agerton, 84, of Pageland, South Carolina passed away in the early hours on Friday, March 23, 2018. Jon was born on February 18, 1934 in Pageland, South Carolina to the late Brown "Daddy Brown' Agerton and Effie Rose "Mommie F" Watts Agerton. Jon met and married the love of his life, Elizabeth (Lib) Pate and they enjoyed fifty eight wonderful years together. Jon served two years in the Army and retired as a turkey farmer after many years. Jon loved life and loved to laugh, make others laugh and joke around. He loved going to auctions and sales, going to eat with friends and family, and having fun. He was also a sweet, generous soul and spent a large portion of his life taking care of others: his mother-in-law, brother-in-law, son, and late wife Lib. He savored life and believed in living life to its fullest. He used to tell his kids, "If there is anything you really want to do, any places you want to visit, do them now while you still have the chance." Jon held onto the scripture throughout his life. Psalm 46:1, "God is our refuge and strength, an ever-present help in trouble" His favorite advice was "You are living your golden years now and don't know it." He loved the beach and spoke often of how he loved Florida. He is now in heaven with his wife, Lib. He left behind many family members, friends, and others who loved him deeply and are going to miss him so very much. Jon is preceded in death by his wife, Elizabeth (Lib) who passed away last April and sister, Katherine "Kitty" Little. He is survived by a brother, Tommy Agerton (Carolyn) and a sister Edythe "Edie" Agerton Hansen of Pageland, South Carolina; two daughters, Pam Boies and Ann Lucas of Matthews, North Carolina; two sons, Barry and Jonny Agerton of Pageland, South Carolina; three grandchildren, Chris Agerton of Pageland, David Boies of Matthews, and Kelly Taub of Charlotte; four great-grandchildren, Miranda and Christian Agerton of Pageland and Stella and Jack Taub of Charlotte; long time family friend, Barbara Knight; four-legged companion, Buster Brown; as well as, many nieces and nephews. A Celebration of Life Graveside Service will be held at 2:00 PM on Monday, March 26, 2018 at Wolf Pond Baptist Church Cemetery with Pastor Mark Evans officiating. In lieu of flowers, memorials may be made to Wolf Pond Baptist Church, 78 Wolf Pond Church Road, Pageland, South Carolina 29728, Alzheimer's Association South Carolina, 4124 Clemson Boulevard, Anderson, South Carolina 29621, Zion United Methodist Church, 647 Zion Church Road, Pageland, South Carolina, or Wounded Warrior Project, 4899 Belfort Road, Suite 300, Jacksonville, Florida 32256. Baumgartner Funeral Home of Pageland, South Carolina (www.baumgartnerfh.com) is assisting the Agerton Family.

The family of Jon Edward Agerton created this Life Tributes page to make it easy to share your memories.