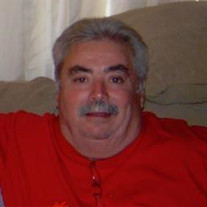 Joseph Vincent Viteritto of Pageland SC, died on Monday, March 5, 2018 at home with his daughter by his side, while under the care of Hospice of Chesterfield Co. He was 72. Joseph was a Trenton, New Jersey area resident most of his life. He graduated from Hamilton High West in 1964. Joseph owned and operated a television repair shop, was a laborer for Stauffer/Kalex Chemical Company, and was an Assistant Engineer in charge of Maintenance at a correctional facility in NJ till his retirement in 1999. Being an avid horseman Joseph retired to Pageland, SC where he could spend his time owning and riding horses. When his health no longer allowed him to enjoy his passion for horses he became a frequent volunteer and donor to many charities. Joseph was the son of the late Vincent J. and Frances (Porcelli) Viteritto, brother of the late Frances (Cookie) Kurz, husband to the late Judith (Barger) Viteritto, and grandfather to the late Joseph Vincent (Joey) Viteritto. He was the Son-in-law of the late Thomas (Nina Smallwood) Barger. Brother-in-law to the late Edward Prosser, Ira (Zella) Emerson, and Robert (Virginia) Pierce. He is survived by his daughter and sons, Tina Revilla (husband Manuel) of NJ, Vincent Viteritto (fiancé Victoria) of NJ, and Thomas Viteritto (wife Melanie) of PA; along with granddaughter Michaela Viteritto of SC, brothers Daniel Viteritto (wife Chris)of TX, Ronald Viteritto (wife Rita) of PA, and Richard Viteritto of FL; A brother –in – law, John Kurz of PA; and Two sisters-in-law Shirley Keks (husband Joe) of FL and Joyce Reed of NJ. Special thanks to supportive family friends Gina Minestra and her children of SC, Elliot Poag, Kathleen Evans and their daughter Brooke of SC, and the staff of Hospice of Chesterfield County. Joseph also leaves behind many loving cousins, nieces, nephews, and lifelong friends. Joseph, per his final request, he will have his body donated to science. It was his wish that, in lieu of services and flowers, you send contributions in memory of Joseph Vincent Viteritto directly to: Hospice of Chesterfield County at: 700 West Boulevard, PO Box 293 Chesterfield, South Carolina 29709-0293 or via Pay Pal. Gratitude is expressed to the Baumgartner Funeral Home of Pageland, South Carolina (www.baumgartnerfh.com) for assisting the Viteritto Family.

Joseph Vincent Viteritto of Pageland SC, died on Monday, March 5, 2018 at home with his daughter by his side, while under the care of Hospice of Chesterfield Co. He was 72. Joseph was a Trenton, New Jersey area resident most of his life. He... View Obituary & Service Information

The family of Joseph Vincent Viteritto created this Life Tributes page to make it easy to share your memories.

Send flowers to the Viteritto family.