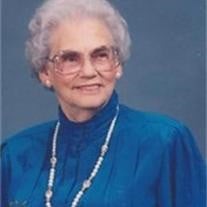 Juanita Johnson Mungo, Pageland, SC Juanita Johnson Mungo, 95, went to her heavenly home April 6, 2010. She was the daughter of the late Ted and Stella Knight Johnson. She was predeceased by her husband, G.C. Mungo, Jr. and two sisters, Irene J. Baker and Susie J. Caldwell. Juanita graduated from Angelus High School. She spent many years caring for the family farm and her invalid father. After marrying G.C. Mungo, she moved to Pageland and spent her public working years in retail, retiring from the Pageland Food Center. She was always working and doing for others but first and foremost she served her Lord and Savior, Jesus Christ. Juanita was the oldest living member of Pageland First Baptist Church, which she attended faithfully as long as she was able. She was a resident of Monroe Nursing and Rehab since November of 2009. Prior to that for two years she was a resident of Springhill Assisted Living in Pageland where she received wonderful care. Before moving to Assisted Living, Juanita was lovingly cared for at home by her sister, Ann. Many heartfelt thanks to all her caregivers. She is survived by her sister, Ann J. Dulin of the home, brother-in-law, Dan Mungo (Betty) of Pageland, SC, sister-in-law, Joy M Richardson (Jack) of Mullins, SC, and several Nieces and Nephews. Visitation will be held at Sutton-Baumgartner Funeral Home in Pageland Thursday, April 8, 2010 from 6 to 8 PM. Funeral will be at Pageland First Baptist Church at 2 PM Friday, April 9, 2010 with burial to follow at church cemetery. The family requests that memorials be made to Pageland First Baptist Church, PO Box 126, Pageland, SC 29728 or Hospice Group of your choice.

The family of Juanita Mungo created this Life Tributes page to make it easy to share your memories.

Send flowers to the Mungo family.