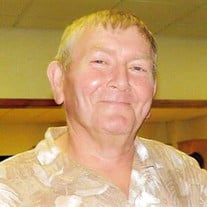 Mr. Luther Wade Medlin, age 63, of Pageland, South Carolina entered the gates of Heaven at 3:00 A.M. on Saturday, August 25, 2018 surrounded by his wife and loving family. Wade was a retired sheet rock finisher at Pressley Dry Wall, where he worked for 40 years. He was born to the late Marvin and Louise Medlin on September 24, 1954. Wade was a very humble and loving man. If you knew him you had to love him. He was never seen without a smile on his face. Wade loved spending time with his family, especially Kelsey and Kayden Smith. When he was not spending time with his family, Wade enjoyed going to yard sales and the flea market. In addition to his parents, Wade is preceded in death by his two brothers, Larry and Johnny Medlin and also his father-in-law and mother-in-law, Rev. Wayne and Peggy Baker. He is survived by his loving wife of 34 years, Susan "Sue" Baker Medlin of Pageland, South Carolina; one sister, Eva Thompson (Johnny) of Unionville, North Carolina; one brother, Robert Medlin; sister-in-law, Linda Medlin, special niece and her family, Ben and Terry Smith, Kelsey and Kayden. In-laws that loved him very much, Debbie and David Arant, Ricky and Julie Baker, Mike and Judy Baker, and Aaron and Julie Baker; many nieces and nephews and also many great nieces and nephews. A Celebration of Life Funeral Service will be held at 12:00 PM on Monday, August 27, 2018 at Mt. Pisgah Baptist Church with Pastor Richard Collins officiating. Burial will follow in the church cemetery. The family will receive friends prior to the service from 11:00 AM to 12:00 PM on Monday, August 27, 2018 in the Sanctuary of Mt. Pisgah Baptist Church 3530 Highway 601North, Pageland, South Carolina 29728. In lieu of flowers, the family request that memorials be made to Hospice of Chesterfield County, P.O. Box 293, Chesterfield, South Carolina 29728. Baumgartner Funeral Home of Pageland, South Carolina (www.baumgartnerfh.com) is assisting the Medlin Family.

Mr. Luther Wade Medlin, age 63, of Pageland, South Carolina entered the gates of Heaven at 3:00 A.M. on Saturday, August 25, 2018 surrounded by his wife and loving family. Wade was a retired sheet rock finisher at Pressley Dry Wall, where he... View Obituary & Service Information

The family of Luther Wade Medlin created this Life Tributes page to make it easy to share your memories.

Send flowers to the Medlin family.