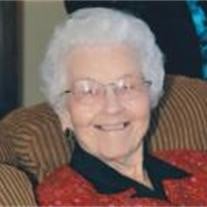 Mrs. Margaret Tippins, 86, of Marshville, NC, passed away on Thursday, February 3, 2011. Mrs. Tippins is the daughter of the late Robert and Bessie Sullivan Jackson. Mrs. Tippins is predeceased by her husband Glenn Tippins and brother... View Obituary & Service Information

The family of Margaret Tippins created this Life Tributes page to make it easy to share your memories.

Send flowers to the Tippins family.