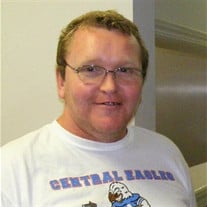 Mr. Marty Preston Smith, 48, of Pageland, South Carolina passed away on Monday, March 19, 2018 at CHS-Union while surrounded by his loving family. Marty was born on July 23, 1969 in Cheraw, South Carolina to the late Norman "Mack" Smith and Geneva Deason Smith. Marty grew up in the Pageland Community and graduated from Central High School, as well as, worked for Screwmatics of Pageland for many years. He was known as a simple man. He never met a stranger and would talk to anyone as if he had known them his whole life. His memory was sharp and he never forgot anything. If you were wrong, he would make sure he wouldn't let you forget it. His humorous personality, led you to find him always joking and smiling. Marty had a way about him that would either have you laughing, smiling or crying. Even though he was hardheaded and stubborn as a mule, Marty could tell a tale as big as the ocean. Marty loved wrestling, the Dallas Cowboys, the Dukes of Hazzard, and Hee Haw. He thoroughly enjoyed watching Andy Griffin and Gomer Pyle and was able to recite every line word for word of every episode of the show. Marty's biggest passion was the honor and love he had as serving as the leader of the Chain Crew for the Central High Eagles. He always wore his shirt for the team "loud and proud." Marty had the purest of hearts and lived life outside the box. He was the most imperfect, yet perfect person you could ever have had the privilege of meeting. He was loved by many and will be dearly missed by all who knew him. Those left to celebrate and remember his life include is loving brothers, Ray Hargove (Shirley) of Moundsville, West Virginia, Marshall Thompson (Debbie) of Maxton, North Carolina, Mike Hargrove (Melissa) of Pageland, South Carolina, Toby Hargrove of Pageland, South Carolina, Jimbo McGready of Kershaw, South Carolina, and Howard Smith of Pageland, South Carolina; sisters, Bennie Alexson of Pageland, South Carolina, Lashanda Price (Steve) of Pageland, South Carolina, and Tammy Wray (Darryl) of Pageland, South Carolina; also numerous nieces and nephews and great nieces and nephews. A Celebration of Life Funeral Service will be held at 2:00 PM on Saturday, March 24, 2018 at Lighthouse Baptist Church with Rev. Tim Williams, Rev. Johnny Tadlock and Rev. Steven Aldridge officiating. Burial will follow at Greenlawn Memorial Park of Pageland. The family will receive friends from 6:00 PM to 8:00 PM on Friday, March 23, 2018 at Baumgartner Funeral Home, 708 West McGregor Street, Pageland, SC 29728. In lieu of flowers, memorials may be made to Pee Dee Shriners Club, 3053 East Cres Circle, Florence, South Carolina 29506 Baumgartner Funeral Home of Pageland, South Carolina (www.baumgartnerfh.com) is assisting the Smith Family.

Mr. Marty Preston Smith, 48, of Pageland, South Carolina passed away on Monday, March 19, 2018 at CHS-Union while surrounded by his loving family. Marty was born on July 23, 1969 in Cheraw, South Carolina to the late Norman "Mack" Smith and... View Obituary & Service Information

The family of Marty Preston Smith created this Life Tributes page to make it easy to share your memories.