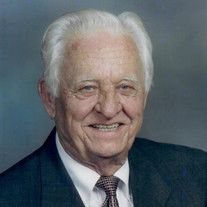 Mr. Marvin James Dutton, 91, of Pageland, South Carolina went to be with his Lord on Tuesday, March 21, 2017 in Florence, South Carolina while surrounded by his loving family. Marvin was born in Anson County on April 22, 1925 to the late Charles Marshall Dutton and Hattie Freeman Dutton. He later met and married the love of his life of 33 years, the late Evelyn Phillips Dutton. Marvin spent his life in the Pageland community previously serving on the Town Council, the Watermelon Festival Committee and was a past member of the Chamber of Commerce. He was the owner and operator of Pageland Nursery and was also a member of Pageland Presbyterian Church where he served as an Elder for many years. He served as a forward observer in the European Theatre including the landing at Normandy and the Battle of the Bulge. In addition to his parents and loving wife, Marvin is predeceased in death by brothers, Raymond Dutton, Bill Dutton, Sam Dutton, Marion Dutton, Walter Dutton, Lewis Dutton and Henry Dutton, sisters, Ina England, Mary Adams and Ruth Lill. Those left to celebrate and remember his life include his loving daughters, Debbie Rivers (Eddie) of Pageland, South Carolina and Sandra Redfearn (Brother) of Cheraw, South Carolina, sister, Martha Scott of Garner, North Carolina, grandchildren, Bradley Redfearn (Tish) and Emily Adams (Scott), four great-grandchildren and also numerous nieces and nephews. A Celebration of Life Graveside Service will be held at 3:30 PM on Friday, March 24, 2017 at Greenlawn Memorial Park of Pageland with Pastor Bobby Cato officiating. The family will receive friends from 2:00 PM - 3:00 PM. on Friday, March 24, 2017 at Baumgartner Funeral Home, 708 West McGregor St., Pageland, South Carolina 29728. In lieu of flowers memorials may be made to Mercy In Me Free Health Clinc, PO Box 1684, Cheraw, SC 29520 or McLeod Hospice House, 1203 E. Cheves St., Florence, SC 29506. Baumgartner Funeral Home of Pageland, South Carolina (www.baumgartnerfh.com) is assisting the Dutton Family.

Mr. Marvin James Dutton, 91, of Pageland, South Carolina went to be with his Lord on Tuesday, March 21, 2017 in Florence, South Carolina while surrounded by his loving family. Marvin was born in Anson County on April 22, 1925 to the late Charles... View Obituary & Service Information

The family of Marvin James Dutton created this Life Tributes page to make it easy to share your memories.

Send flowers to the Dutton family.