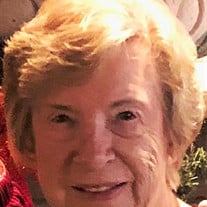 Mary Joann Jordan, age 85, of Pageland, SC, died March 22, 2020. Born in Marshville, NC on September 29, 1934, she was the only daughter of six children born to Benjamin Franklin Mangum and Mary Blanche Autry Mangum. She survived growing up with five brothers which taught her to be the strong lady she became. Joann was born in Marshville, NC and lived there until she married Zeb T Jordan, Sr. (deceased) and became a U.S Air Force wife moving to Elgin Air Force Base to begin raising their family. After he retired from the military, they moved back to SC from Homestead, FL and became business owners in the town of Pageland, SC, which they called home. Joann later became a savvy property business owner after her husband's death in 1998. However, Joann's most treasured career was being a mother, grandmother and great grandmother to her family. Holidays were not just a reason to gather with family for her, it was a reason to cook everyone's favorite dish and dessert. There could never be too much food. She is survived by her loving 4-legged companion, Dusty; son, Zeb T Jordan Jr of Pageland, SC; daughters, Wanda J. Laney of Salisbury, NC, Shirley J. Hill of Marietta, GA, Wendy J. Desrosiers and son-in-law, John Desrosiers of Sarasota, FL; grandchildren, Stephanie L. Price (Randy), Danny D. Laney, Jr. (Misty), Kristen Kingen (David), Zachary Jordan (Kelly), Amanda Hill, Chris Hill and Katherine Hill (Robby), Jake Desrosiers and Johna Desrosiers; great grandchildren, Kassidy Price, Colton Price, Cayson Price, Lexie Laney, Jordan Laney and Raylan Ballentine. She also leaves behind her beloved brother, Ronnie Mangum (Patsy) of Monroe, NC and many nieces and nephews whom she loved dearly. Throughout her lifetime, Joann touched the lives of many people. Her friendships were long-lasting, and she valued each and every one of them regardless of time or distance. Whether through phone calls, lunch or dinner dates, she made every effort to remain in meaningful contact. Above all, Joann's faith in God was the foundation of her ability to live life to the fullest and bring joy to all those around her. She is now our angel guiding us as we move on without her. For those who prefer to make a donation in Joann's name, donations may be made to Tidewell Hospice Philanthropy Department, 5955 Rand Boulevard, Sarasota, FL 34238 or www.TidewellHospice.org; American Lung Association, 55 W. Wacker Drive, Suite 1150, Chicago, IL 60601; The American Diabetes Foundation, P.O. Box 15829, Arlington, VA 22215; or to White Plains Baptist Church in Pageland, SC, where she regularly attended church services. People may visit Baumgartner Funeral Home on Thursday, March 26, 2020 from 10:00 AM to 5:00 PM to pay their respects. There will be a private family graveside service on Friday, March 27, 2020 at Greenlawn Memorial Park of Pageland with entombment to follow the service. The family will hold a celebration of life service at a later date. Baumgartner Funeral Home of Pageland, South Carolina (www.baumgartnerfh.com) is assisting the Jordan Family

The family of Mary Joann Jordan created this Life Tributes page to make it easy to share your memories.