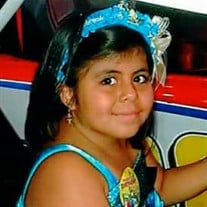 Ms. Nelly Alexandra Deleon Herrera, 8 of Pageland, South Carolina passed away on Tuesday, September 1, 2015, at CMC - Union in Monroe, North Carolina. Ms. Nelly was born on Saturday, June 25, 2007 in Jackson, Mississippi, to Emilio Deleon Jr. and Irma Pinto. She is survived by her Father, Emilio Deleon Jr. of Forest, MS and Irma Pinto of Pageland, SC, Brothers, Pedro Lopez of Las Choapas, Mexico, Andres May of Pageland, SC and Bryan Deleon of Pageland, SC, Sister, Elizabeth Lopez of Mexico, Paternal Grandparents, Emilio Deleon and Luz Del Carmen of Mexico and Maternal Grandparents, Saul Herrera and Ma Nely Herrera of Mexico. There will be a Celebration of Life Funeral Service for Nelly on Sunday, September 6, 2015 at 2 PM at the Hispanic Church of God. Visitation will be held on Saturday, September 5, 2015 from 6:00 to 8:00 PM at Baumgartner Funeral Home. Burial will follow at Rose Hill Cemetery in Pageland. Online condolences may be made to the family at baumgartnerfh.com

The family of Nelly Alexandra Deleon Herrera created this Life Tributes page to make it easy to share your memories.

Send flowers to the Herrera family.