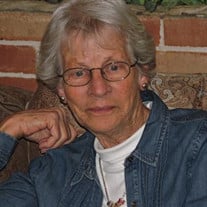 Ms. Phyllis Cowick Oliver, 81, of Pageland, SC, passed away on Friday, March 15, 2019. Ms. Oliver retired from Springs Customer Service after 25 years, after which she continued to give her time as a volunteer at Springs Memorial Hospital and served for many years as the Treasurer at Dudley Baptist Church. She was a graduate of Pageland High School and attended Columbia College. Ms. Oliver enjoyed her many travels over the years either with family or her close group of friends from Springs. Ms. Oliver was born July 27, 1937 in Pageland to the late Furman T. and Ruth Funderburk Cowick. She is preceded in death by her husband, Bobby Oliver; brothers, Tony Cowick, Alvin Cowick and Gene Cowick and sisters, Sandra Hall, Emily Wrenn, and Judy Keller. Those left to celebrate and remember her life include her son, Michael Oliver (Lynn) of Lancaster; sisters, Frances Thompson of Monroe, Sue Deering and Janet Haigler of Pageland; two grandchildren, Jessica Oliver (Johnnie Matthews) of Columbia and Matthew Oliver (Kalli) of Beaufort and great-grandson Ezra Matthews of Columbia. The family will receive friends from 6:00 PM-8:00 PM on Monday, March 18, 2019 at Baumgartner Funeral Home. A Celebration of Life Service will be held at 3:00 PM on Tuesday, March 19, at Dudley Baptist Church with the Rev. Jerry Haney officiating. The burial will follow in Greenlawn Memorial Park of Pageland. In lieu of flowers, memorials may be made to Dudley Baptist Church, 101 Dudley Rd, Pageland, SC 29728. Baumgartner Funeral Home of Pageland, South Carolina (www.baumgartnerfh.com) is assisting the Oliver Family. Online condolences may be made to the family at baumgartnerfh.com

Ms. Phyllis Cowick Oliver, 81, of Pageland, SC, passed away on Friday, March 15, 2019. Ms. Oliver retired from Springs Customer Service after 25 years, after which she continued to give her time as a volunteer at Springs Memorial Hospital... View Obituary & Service Information

The family of Phyllis Cowick Oliver created this Life Tributes page to make it easy to share your memories.

Send flowers to the Oliver family.