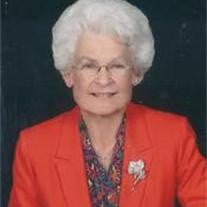 Ms. Rebekah Thompson Seegars, 88, of Jefferson, SC passed away on Monday, April 4, 2011. Ms. Seegars is the daughter of the late William Matthew and Nekoda Chastain Thompson; she is also predeceased by her husband, Richard Wayne Seegars,... View Obituary & Service Information

The family of Rebekah Seegars created this Life Tributes page to make it easy to share your memories.

Send flowers to the Seegars family.