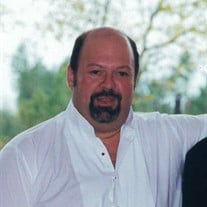 Mr. Ricky Sheppard Watts, 56, of Pageland, SC passed away on Tuesday, September 7, 2021 at his home. Mr. Watts was born on September 21, 1964 in Monroe, NC to the late Isaac Watts and Connie Mae Jordan Watts. He was a member of Long Branch... View Obituary & Service Information

The family of Ricky Sheppard Watts created this Life Tributes page to make it easy to share your memories.

Send flowers to the Watts family.