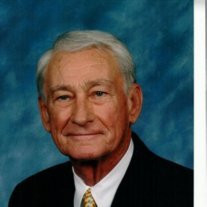 Robert Louis "Check" Blakeney of Pageland, S.C., died Tuesday, December 17, 2013, at his home. He was born in Pageland and was the son of Burrus Alexander and Fannie Mangum Blakeney. Mr. Blakeney was a graduate of Pageland Centralized High School. He was awarded the B. A. Mangum Athletic Medal (now the Griggs-Bolton Medal) for Best All Around Senior Athlete. He attended the University of South Carolina and served in the Army of Occupation in South Korea in 1947. He was retired from the United States Postal Service after having served as a rural mail carrier for 40 years. He was also employed by the C. M. Tucker Lumber Corporation for over 35 years. "Check" was a faithful member of Pageland First Baptist Church for 73 years, where he was a member of the Millon Tucker Sunday School Class. He was also a founding member of White Plains Country Club, a past President and current Board Member. Survivors include his loving and faithful wife of 62 years, Ernestine "Teeny" Cato Blakeney; daughters Andrea "Andi" Hill (Wayne) of Timmonsville, S.C. and Lori Bellamy (Robert) of Myrtle Beach, S.C.; grandsons Blakeney Kyle "Blake" Hill of Ft. Worth, TX and Louis Wayne Hill of Clemson, S.C.; brother Dr. Billy C. "Bick" Blakeney of Pageland, S.C.; nieces Denise Pettit, Diane Bonner, Donna Joye and Patti Hinson and extended family and friends. He was predeceased by his parents and his sister-in-law Patricia Griggs Blakeney. Visitation will be Friday, December 20, 2013, from 4:00p.m. - 6:00p.m. at Baumgartner Funeral Home, 708 W. McGregor Street, Pageland. A funeral service celebrating his life will be held Saturday, December 21, 2013, 2:00p.m., at First Baptist Church, 203 W. Pigg Street, Pageland, with burial in the church cemetery. Memorials may be made to Pageland First Baptist Church or Hospice of Chesterfield County, P.O. Box 293, Chesterfield, S.C. 29709.

Robert Louis "Check" Blakeney of Pageland, S.C., died Tuesday, December 17, 2013, at his home. He was born in Pageland and was the son of Burrus Alexander and Fannie Mangum Blakeney. Mr. Blakeney was a graduate of Pageland Centralized High... View Obituary & Service Information

The family of Mr Robert L Blakeney created this Life Tributes page to make it easy to share your memories.

Send flowers to the Blakeney family.