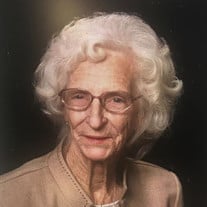 Mrs. Ruby Pinyan Funderburk, 80, of Pageland, SC passed away on Saturday, January 18, 2020 in Monroe, NC with her family by her side. Mrs. Ruby Funderburk was born on October 18, 1939 in Whiteville, North Carolina to the late Perry Pinyan and... View Obituary & Service Information

The family of Ruby Pinyan Funderburk created this Life Tributes page to make it easy to share your memories.