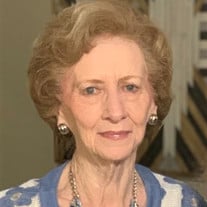 Sally Ruff Lewis Kohler, 83, of Pageland, SC went to Heaven on March 22, 2021. She was born on January 21, 1938 to the late E. V. "Brick" Lewis and Nell Brooks Lewis. In addition to her parents, she was predeceased by her siblings Daniel Street Lewis, Thomas Walter Lewis, and Judith LaVell Lewis. Sally leaves to treasure her memory her husband of nearly 61 years, W. E. "Bill" Kohler, Jr. of Pageland, her son W. E. "Tripp" Kohler, III of Pageland, and her daughter Meg Kohler Duncan (Mike) of Columbia, SC. Sally was also survived by her brothers E. Crosby Lewis (Cleo) of Columbia and Dr. Joseph M. Lewis (Jill) of Florence, SC. Along with many special nieces, nephews and cousins, Sally had two granddaughters who loved her dearly: Sally Elizabeth Duncan Heydary (Nemat) of Greensboro, NC and Laura Brooks Duncan Kimball (Sam) of Graham, NC. Sally was blessed with three great grandchildren Nemat and Naveed Heydary and Hannah Kimball in the last four years. Sally graduated from Dreher High School in Columbia and the University of South Carolina. She was a talented floral designer, artist, and decorator whose paintings and designs brought beauty to the residents of Chesterfield County and Union County, NC for many years. Sally was a charter member of the Pageland Garden Club and served as President numerous times; she remained active in the Garden Club until the time of her death. Sally was also a longtime member of Central United Methodist Church in Monroe where she sang in the Chancel Choir and was a member of the United Methodist Women. Sally loved her family fiercely and was a wonderful wife, mother, and Sassy to her grandchildren and great grandchildren. There will be a graveside service at Pageland First Baptist Church's cemetery on Friday, March 26, at 3 p.m. Friends may sign the guest register at the home or at Baumgartner Funeral Home from 10 a.m. to 5 p.m. on Thursday, March 25. Memorials may be made to Central United Methodist Church, 801 S. Hayne St., Monroe, NC 28112 or a charity of one's choice. Baumgartner Funeral Home of Pageland, South Carolina (www.baumgartnerfh.com) is assisting the Kohler family.

Sally Ruff Lewis Kohler, 83, of Pageland, SC went to Heaven on March 22, 2021. She was born on January 21, 1938 to the late E. V. "Brick" Lewis and Nell Brooks Lewis. In addition to her parents, she was predeceased by her siblings Daniel... View Obituary & Service Information

The family of Sally L Kohler created this Life Tributes page to make it easy to share your memories.

Send flowers to the Kohler family.