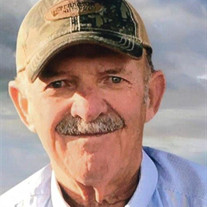 Mr. Sammy Lee Crook, 78, of Lancaster, SC passed away on Wednesday, September 2, 2020 at The Rehab Center of Cheraw. He was born on October 5, 1941 in Chesterfield County, South Carolina, a son of the late Samuel A. Crook and Inez Plyler Crook.... View Obituary & Service Information

The family of Sammy Lee Crook created this Life Tributes page to make it easy to share your memories.

Send flowers to the Crook family.