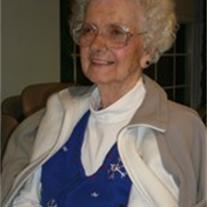 Sarah Risher Watford Moore, of Walterboro, formally of Pageland, South Carolina Services for Sarah Risher Watford Moore, 92, wife of Dr. George E.H. Moore of Walterboro, S.C., will be held at Pageland United Methodist Church, Pageland, S.C. conducted by Rev. Nena Reynolds and Rev. Don Haton on Tuesday, March 16, 2010 at 2:00 PM. Burial will follow in the Greenlawn Memorial Park. The family will receive friends at the church following the interment. The family requests that memorials be made to Pageland United Methodist Church, PO Box 25, Pageland, S.C. or Epworth Children’s Home, PO Box 50466, Columbia, South Carolina. Sarah passed away on March 12, 2010. Born in Colleton County, SC, she was the daughter of Col. James F. Risher and Nelle McTeer Risher. She graduated from Columbia College in 1939 where she was president of the senior class and was listed in “Who’s Who in American Colleges and Universities.” She served as permanent class president of the class of 1939 and was active in Columbia College alumnae affairs. After her marriage to Edward Coker Watford, she lived in Pageland, South Carolina for over fifty years where she was active in church and civic affairs. For 24 years she taught public school music in Chesterfield County Schools and also had private students in organ and piano. She was a member of Delta Kappa Gamma having served as president of the local chapter. She was also a member of the Congenial Study Club, the Friends of the library, the Pageland Garden Club and for many years served on the Pageland Watermelon Festival Steering Committee. She was a loyal member of the Pageland United Methodist Church serving as organist and choir director for over 50 years. She served in many roles of leadership in the local and district church. On her 80th birthday, the young adults whom she had taught for many years named their class in her honor. She loved the church and arranged the activities of her life around it. She was married to Edward Coker Watford for 52 years and is survived by their two children, Mary Nelle Gore (William E. Gore, Jr.) and Edward Coker Watford, Jr. (Sallie Kate Watford). She is also survived by Grandchildren William E. Gore III (Heather), James A. Gore (Anne), Joel E. Gore, and Sallie Watford and five great-grandchildren. She is also survived by her husband Dr. George E. H. Moore, her sister Mary Risher Tatum, and brothers Lanning P. Risher and Eugene V. Risher. Surviving are also step-children Joyce Bledsoe (David), Lynn Crouch (Tom), Haskell Moore (Jane), Salle Moore, and Pam Moore, and several step-grandchildren. She was predeceased by her first husband, Edward Coker Watford, her parents, her step-mother, Emma Jane Varn Risher, and brothers James F. Risher, Jr. and William Rhett Risher. Sarah was a beautiful, gentle person who loved her God, her family, and her many friends. Her life was a beautiful gift to God. The family would like to thank the staff at The Haven in the Summit Alzheimer’s Facility in Columbia and the nursing staff and doctors at Palmetto Health Richland in Columbia for their care and compassion shown to our mother. Her caregiver, Marlene Holland will always be loved by the family for her constant love and devotion. Sutton-Baumgartner Funeral Home, Pageland, South Carolina

The family of Sarah Watford Moore created this Life Tributes page to make it easy to share your memories.