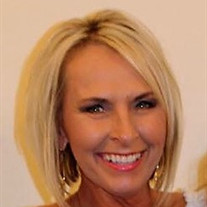 Mrs. Susan Price Breisch, 53, of Pageland, South Carolina passed away on Friday, November 17, 2017 while surrounded by her loving family. Susan was born on September 18, 1964 in Monroe, North Carolina to Wayne Price and the late Frances Evans Price. Growing up in the Pageland Community, Susan was a jack of all trades, being a renaissance of her time and an entrepreneur at heart. She was a cosmetologist for 33 years, the co-owner of City Slickers for 25 years, while also owning a couple daycares & restaurants. Susan's outgoing "life of the party" personality made you feel as though you had known her all your life. She was headstrong and was the type of person who was charitable towards others. She put others before herself even if that meant doing without. Susan truly had a servant's heart. She was an avid motorcyclist and an amazing cook. Susan was a member of Providence Baptist Church, growing up in the church in her younger days, she was there more than the Pastor was. Every time the doors were open you would find her there. She was a loving mother, she lived for her three children, two grandchildren, family, and friends and was extremely proud of them all. Susan made a big impact on the Pageland Community by serving on The Town Council for eight years, as well as, being a member of the Pageland Volunteer Fire Department, where she helped with the clean up after Hurricane Katrina in New Orleans. Susan was a role model to the Town of Pageland and will be dearly missed by everyone whose life she touched during her time here with us. In addition to her mother, Susan is preceded in death by her brother, Scott Price. Those left to celebrate and remember her life include her loving son, Kyle Strickland (Courtney) of Pageland, South Carolina; daughters, Farrah Strickland (Meredith Fant) of Orlando, Florida and Carly Strickland (Jeff Parker) of Pageland, South Carolina; two grandchildren, Olivia Strickland (Kyle) and Reeves Fant (Farrah); father & stepmother, Wayne Price (Carolyn Gwin-Price) of Pageland, South Carolina; brother, Shawn Price of Pageland, South Carolina; sister of the heart, Libby Moore (Rev. Tim) of Marshville, North Carolina; also one step-sister, Deanna Belk of Pageland, South Carolina. A Celebration of Life Funeral Service will be held at 2:00 PM on Tuesday, November 21, 2017 at Providence Baptist Church with Rev. Tim Moore officiating. Burial will follow in the church cemetery. The family will receive friends from 5:00 PM to 9:00 PM on Monday, November 20, 2017 in the sanctuary of Providence Baptist Church, 232 Providence Church Road, Pageland, South Carolina 29728. Baumgartner Funeral Home of Pageland, South Carolina (www.baumgartnerfh.com) is assisting the family.

Mrs. Susan Price Breisch, 53, of Pageland, South Carolina passed away on Friday, November 17, 2017 while surrounded by her loving family. Susan was born on September 18, 1964 in Monroe, North Carolina to Wayne Price and the late Frances Evans... View Obituary & Service Information

The family of Susan Price Breisch created this Life Tributes page to make it easy to share your memories.

Send flowers to the Breisch family.