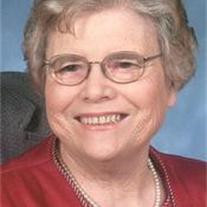 Ms. Vernese T. Kirkley, 80, of Jefferson, SC went to be with the Lord on Thursday, October 25, 2012 under the loving care of her family and Hospice. Ms. Kirkley is the daughter of the late Dave. N. and Mettie Johnson Terry. She is also... View Obituary & Service Information

The family of Vernese Kirkley created this Life Tributes page to make it easy to share your memories.

Send flowers to the Kirkley family.