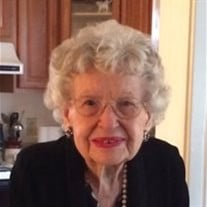 Jefferson, SC Virginia L. Miller, loving mother and grandmother, died peacefully at Hospice of Charleston on May 10, 2014. Two days before her death she celebrated her 90th birthday at a relocated, long planned gathering with her four children. Fondly known as both Jenny and Ginny, she was born May 8, 1924, in Jefferson, SC to Clarence Lee Thomas and Julia Gardner Thomas. She was a descendent of George Miller, an early settler of the Lynches River area of South Carolina and Michael Miller, who later founded Jefferson. She was proud of her heritage, loved her community, and joked that she was related to almost everyone -- at least by marriage. Ginny graduated from Jefferson High School, Winthrop College (BS in Home Economics and Chemistry), taught high school for a year, and then moved to Detroit, Michigan in 1946 where she met her future husband, D. MacNeill “Mac” Miller. She and Mac were married at Jefferson Presbyterian Church on June 18, 1949. They made their home for the next 33 years in Birmingham, Michigan where they raised their four children. They retired and returned, as was Ginny’s wish, to Jefferson to spend the rest of their lives and to care for her mother in her last year. Ginny loved to dance, play bridge, read, visit with friends and family, and was the keeper of all family history and journals. She loved her family -- children, grandchildren, in-laws, nieces and nephews, and all the extended family she could find. She also loved and appreciated her friends and neighbors, fellow church members, and friends of her children. She was very independent and happy that she could stay in her family home as long as she did thanks to wonderful help from four very special women. For the last nine months of her life, she lived contentedly at Springhill Assisted Living in Pageland, where she enjoyed the sense of community and the extraordinary assistance she received. She passed away as she would have wanted -- only a week after leaving Springhill. Ginny is survived by her four children and their spouses, Debbie (Jim) Beuche of Ann Arbor, MI, David (Deb) Miller of Bloomfield Hills, MI, Julie (Mike) Mitaro of Mt. Pleasant, SC, and Jim (Debra) Miller of Sumter, SC., 14 grandchildren, Jeff (Jen) Beuche of Boulder, CO, Bill Beuche of Ann Arbor, MI, Blair Beuche of Ann Arbor, MI, Erica Miller of Denver, CO, Evan Miller of Atlanta, GA, Alex Lapanowski of College Station, TX, Dan Mitaro of NYC, Elizabeth Mitaro of NYC, Emily Mitaro of Mt. Pleasant, SC, Connor, Chris, Ryan, Rebecca, and Hannah Miller all of Sumter, SC. In addition, Ginny had 3 great-grandchildren, and numerous nieces, nephews, great nieces and nephews, great, great nieces and nephews, extended family, and friends -- all of whom she loved dearly. Ginny was preceded in death by her parents, husband, two brothers, Charlton Thomas and Dr. James Thomas, sister, Alice Logan, and a niece, Carolyn Thomas Brown. After a private Burial Service, a Memorial Service and Celebration of Her Life will be held at 3:00 PM on Saturday, May 24, 2014, at Jefferson Presbyterian Church with Pastor David M. Bessinger presiding. In lieu of flowers, if desired, donations can be made to the Jefferson Presbyterian Church, PO Box 278, Jefferson, SC 29718, Hospice of Chesterfield County, PO Box 293, Chesterfield, SC 29709, Hospice of Charleston - Gentiva Hospice Foundation, 3350 Riverwood Parkway, Suite 1400, Atlanta, GA 30339 or the hospice of your choice.

Jefferson, SC Virginia L. Miller, loving mother and grandmother, died peacefully at Hospice of Charleston on May 10, 2014. Two days before her death she celebrated her 90th birthday at a relocated, long planned gathering with her four children.... View Obituary & Service Information

The family of Virginia L. Miller created this Life Tributes page to make it easy to share your memories.

Send flowers to the Miller family.