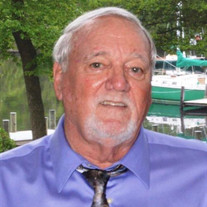 William Thomas Gulledge, Jr. (Bill), 77, of Bridgeville, DE, formerly of Pageland, SC passed away on Saturday, September 11, 2021, after a long and courageous fight against a chronic illness. Raised in Pageland, SC, on a large farm, Bill developed a love for outdoors and agriculture. He graduated from Clemson University with a Bachelor of Science in Agricultural Economics. Bill enjoyed a 30-year career with O.A. Newton & Son, in Bridgeville DE as the General Manager of the Newton Home Division. He was the President and owner of Dual Exchange Land Co. in Bridgeville DE for 30 years, where he was very involved with Land Development, New Home Construction and Rental Property Management. He was the past Director of the Sussex County Board of Realtors and had a wonderful and active membership with the Bridgeville Lions Club, serving as President and holding various other club positions. He was also an active IPTAY and Alumni Fund Member for Clemson University. Bill was the son of the late William Thomas Gulledge, Sr. and Madge Horton Gulledge of Pageland, SC. He is survived by his two children: William C. Gulledge of Richmond, VA, and Tammy R. Grazioli and her husband John of Severna Park, MD, and their mother, Janet Handy Vargas of Bridgeville, DE; and his two grandchildren: Nicholas Grazioli and Sophia Grazioli. Friends are welcome to come by Baumgartner Funeral Home on Tuesday, October 5, 2021 from 10:00 AM to 11:00 AM to sign the register book and pay their respects. A Private Celebration of Life Graveside Service will be held on Tuesday, October 5, 2021 at 12:30 PM at the Graves Family Cemetery at First Baptist Church of Pageland, 203 W. Pigg Street, Pageland, SC 29728 with Dr. Joel Dale officiating. Our family recognizes that the Bridgeville Lions Club not only meant a lot to our father but also means a lot to the community of Bridgeville. In lieu of flowers please consider memorial contributions in Bill's name to the Bridgeville Lions Club, P.O. Box 414, Bridgeville, DE 19933 or First Baptist Church of Pageland, PO Box 126, Pageland, SC 29728. Baumgartner Funeral Home of Pageland, South Carolina (www.baumgartnerfh.com) is assisting the Gulledge family.

The family of William Thomas Gulledge created this Life Tributes page to make it easy to share your memories.

Send flowers to the Gulledge family.