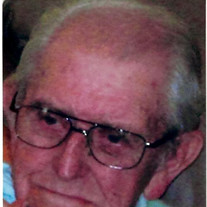 Mr. Winfred Bess Sr., 99, of Pageland, South Carolina went to be with his Lord on Friday, May 27, 2016, while surrounded by his loving family and under the care of Hospice. Mr. Bess was born on May 28, 1916 in Pageland, South Carolina to the late Henry Asbury Bess and the late Maude Evans Bess. He later met and was joined in marriage to the late Mary Louise Langley Bess. Mr. Bess is also preceded in death by his Son, Brian Thomas Bess, three Brothers and two Sisters. He was a member of High Point Baptist Church in Pageland SC, where he had perfect attendance for over 20 years in Sunday School, a former member of the Pageland American Legion and was also a foster father to over 47 children. Mr. Bess also served our country in the United States Army. Mr. Bess is survived by his Daughter, Patty Funderburk (Ray) of Pageland SC, Sons, Lee Bess (Margie) of Pageland SC and Michael Bess of Pageland SC, and is also survived by nine Grandchildren and seven Great Grandchildren. A Celebration of Life Funeral Service will be held Monday, May 30, 2016 at High Point Baptist Church at 2:00 PM with Pastor Rodney Nicholson, Pastor Mack Mullis and Rev. Mitchell Johnston officiating. The burial will follow at High Point Baptist Church Cemetery. The Family will receive friends on Monday, May 30, 2016 from 1:00PM - 2:00PM at High Point Baptist Church Family Life Center. In lieu of flowers, Memorials may be made to Hospice of One's Choice, Pageland American Legion, C/O Neal Kirkley, 918 West Sewell St. Pageland, SC 29728 or Chesterfield Foster Parents Assoc., C/O Linda Whitfield, 394 McManus Rd, Pageland, SC 29728

The family of Winfred Lee Bess, Sr. created this Life Tributes page to make it easy to share your memories.

Send flowers to the Bess family.